TAP018, How to Write the Midpoint of a Novel

Is the middle of your story dragging? Are you halfway through writing your manuscript and not sure where to go from there? If you said, yes to either of these questions than this episode is for you. So, what do you do if the middle of your story is dragging or if you’re stuck in a writing rut at the midpoint? The answer to both of these problems is to include a midpoint scene in your novel. However, before you click away and start writing that scene, there a few things you need to know. In this episode, I will share the necessary ingredients for a great midpoint and five tips on how to write the midpoint of a novel.

TAP018, How to Write the Midpoint of a Novel

by Amelia Hay | The Authorpreneur Podcast - Writing & Self Publishing Tips

This episode is a part of an ongoing series on story structure. If this is the first episode that you’ve listened to or if you’re curious about a plot point that comes before the midpoint, then I’ll include a link to the previous episodes below. Or, you can find all the relevant links in the episode notes in your podcast player.

The Midpoint in a Nutshell

The midpoint needs to appear in the middle of the story at the fifty percent mark. The reason it must appear in the middle is that this plot point acts as a support system that keeps the second act from dragging. However, you can’t just plonk in a midpoint scene at the appropriate point in your story because the first half of the second act should build up to this point. Everything that comes before this moment needs to make sense and be a natural build. However, the midpoint should also set up a chain of actions that will lead the characters to the climactic moment of the novel. A story is a journey, and the midpoint is merely the halfway mark.

5 Tips on How to Write the Midpoint in a Novel 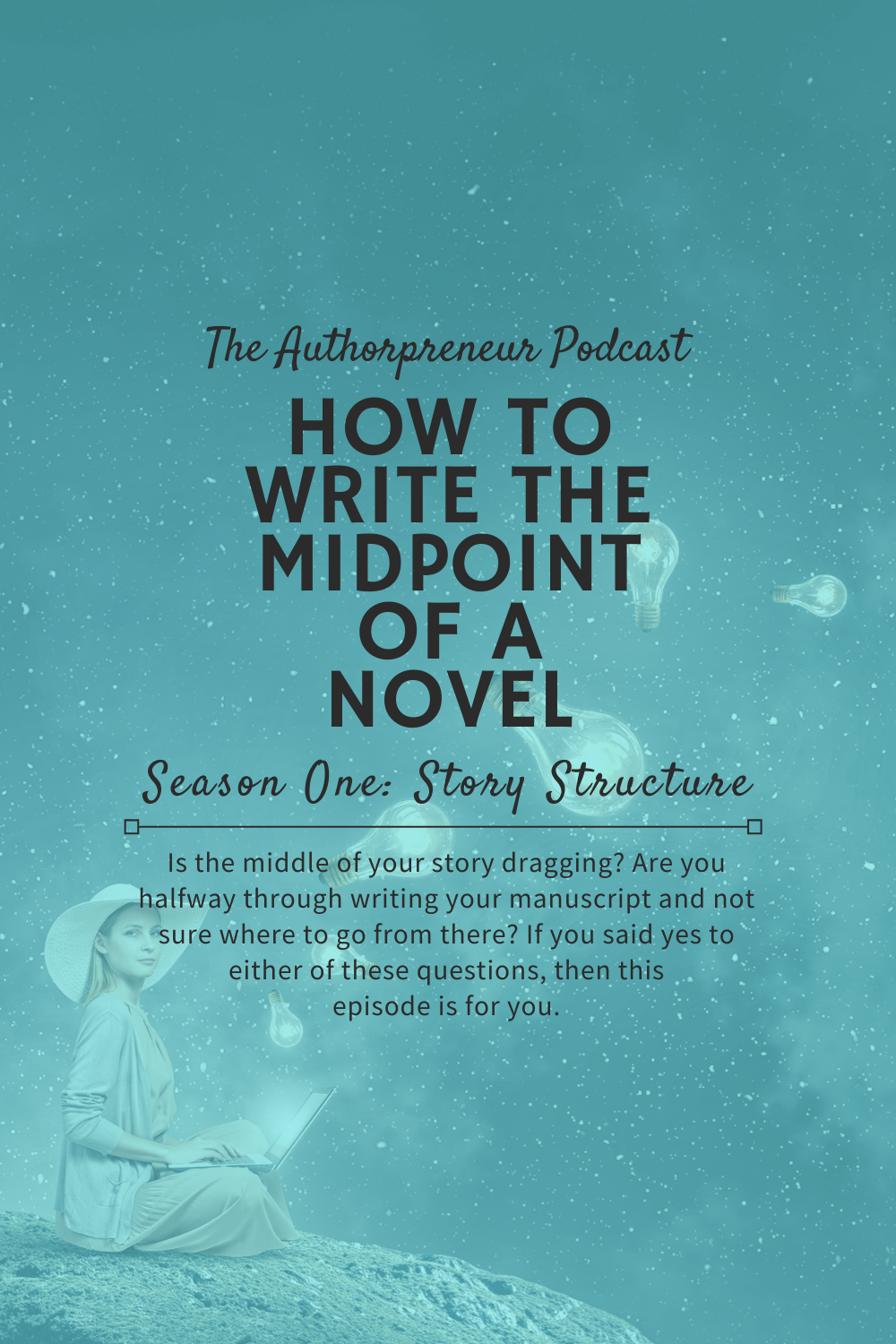 Every scene in your story whether it’s a novella, a short story or a full-length novel needs to move the story forward. The same is true of the midpoint. At the midpoint of your story, you need to reveal something to the reader. Sometimes what your characters know and what your readers know can often be very different.

In light of this, your midpoint reveal doesn’t have to be new for your story’s Protagonist. For instance, a midpoint reveal could take something that your reader already knows and shed new light on it. Some authors choose to reveal a twist at this point in the story such as revealing the protagonist secret.

However, this reveal doesn’t have to be significant it can be subtle. An example of a subtle reveal is revealing the Antagonist’s plan or even the identity of the antagonist if you’ve chosen to shroud them with a little mystery. This moment whether its subtle or major cannot randomly occur in the Midpoint, clues need to be left to foreshadow the moment for the reader. However, keep in mind, a reveal should share new information that changes how the reader and the Protagonist view the world and the story’s problem.

The midpoint should mark that moment in your story where your Protagonist changes from reacting to the events that unfold to taking action. As per the previous tip, this moment cannot occur in a vacuum. Something needs to happen to trigger a response like this. The Protagonist needs to reach a place personally, where he can no longer ignore the antagonist’s plan and the consequences of this plan if it were to be a success. I like to have an entire scene dedicated to this moment that’s after the midpoint, but I tend to write longer books. The Midpoint is a great moment for this to take place. This personal shift should also trigger the Protagonist to take intentional steps to defeat the Antagonistic force.

Tip #3 – It Should Trigger a Change in Plans

The midpoint is also the moment where the Protagonist needs to reach a realisation that he can’t keep going on doing the same thing. He needs to pivot to get better results. While the Protagonist was purely reacting before this moment, he needs to realise that success requires a more strategic approach. And thus, a careful strategic plan to defeat the antagonist is created. As the protagonist’s realisation grows, so does his knowledge of the extent of the problem, and what’s at stake if he should fail. This realisation leads the Protagonist to be open to help from other people to defeat the Antagonist.

Leading up to the midpoint of your story, the Antagonist starts to gain more leverage over the protagonist, and as a result, the stakes grow higher. This increase in leverage also results in the things, or in my case, the facts and evidence the protagonist relies on falls through. Sometimes this outcome is due to things not appearing as they seem or new evidence comes to light that discredits everything the protagonist knows up until now.

In certain circumstances, the protagonist’s support system is stripped away due to his actions. Quite often decisions are made earlier in the story with very little understanding of the more significant problem at play, and as a result, these decisions come back and haunt him. You can see this scenario of decision making with very little knowledge at play in thrillers, especially in the conspiracy and action sub-genres.

The five points you need to consider as you write a strong midpoint for your novel are as follows.

Thank you for listening, and I’ll see you in the next episode of The Authorpreneur Podcast where I’ll discuss how to write the second half of the second act of your story.

← BTS008, How to Stop Procrastinating and Get Out of that Writing Slump TAP019, How to Write the Second Half of the Second Act of a Novel →

Have you found podcast useful? Wish you could buy the host, Amelia D. Hay, a cup of coffee? Now, thanks to Buy Me a Coffee and PayPal you can!