TAP022: How to Write The Climactic Sequence of a Novel

TAP022, How to Write The Climactic Sequence of a Novel

by Amelia D. Hay | The Authorpreneur Podcast - Writing and Self Publishing Advice

So, you’ve reached the third act of your novel, and you’re wondering how to write an unforgettable climactic moment. The real secret is in the building up to this climactic moment in the third act. I remember that feeling I got when I reached the start of the third act for the first thriller that I wrote; I was so excited. This probably sounds a little dramatic, but I could almost hear the hallelujah chorus. As I’ve recently discovered reaching the end of the story, is where the real work starts, no matter how great you are at outlining. But, you’re not here for revision tips, you want to know how to write the climactic sequence of a novel.

And that’s precisely what you’re going to get.

In this episode, I will breakdown the three key elements of the story climax, so that you can write a show-stopping climactic sequence for your novel.

So, let’s get started.

Before I dive into the writing tips, this is the eleventh instalment in my series on Three-Act-Structure. If you’ve just joined me on this episode then, I will link the previous ten episodes below. 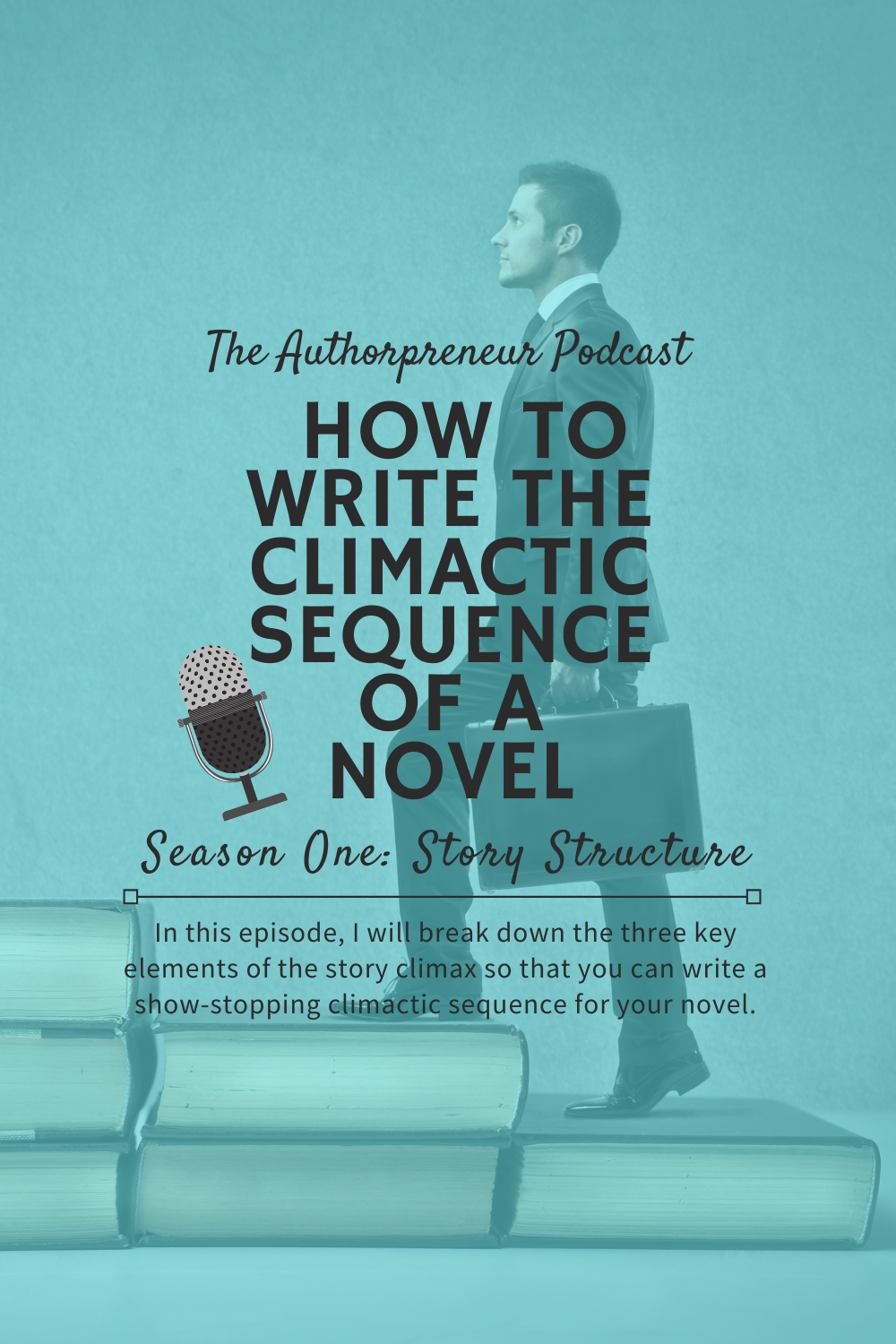 What is the climax of a story?

In terms of three-act-structure, the entire third act is considered the climax. Action needs to raise from the dark night of the soul scene or the seventy-fifth percent mark of the story onward. However, the climactic plot point needs to occur towards the end of the third act. This episode will focus on the crucial scenes leading up to, and including the climactic moment.

Where does the climax start?

A Moment of Recovery

Nevertheless, the journey doesn’t end at this point, your protagonist needs a moment to regroup before he faces the final confrontation and the events that follow on from that point. It’s in this moment of recovery that your hero questions his choices and commitment to the larger story goal. Through questioning, your protagonist finds the strength and a dose of last minute resolve to keep going to the end. This recovery period is crucial because it reveals vulnerability, and creates sympathy with the reader.

Without this moment, your protagonist would be an unrealistic character with an unbreakable amount of resolve, thus making the climax a little less moving. What makes your hero different is he finds what he needs to move forward at the last minute, creating a more inspiring ending, and keeping the connection with the reader.

I will go into this moment within the climactic sequence in greater detail, in the next episode, especially for those of you who write within the Mystery, Thriller, and Suspense genres; but, for now, I’ll share the readers digest version. This is the moment where your hero goes up against the antagonistic force. It’s that final battle. Everything in the story is building up until this point.

As your hero crosses the threshold into the final confrontation the stakes are raised, usually after a last-minute twist or surprise. Things become personal, or the stakes reach greater heights, and more people will be affected by the repercussions of the antagonist force achieving its goal.

But, not all story climactic sequences feature show-stopping gunfights, epic chases, or a fight. Large scale external conflict isn’t the only source of momentum, you can bring to the climactic sequence. Foreshadowing a layer of mystery in your story arc will add a level of tension in the third act. In other genres, the climax can be nothing more than an admission that changes everything for the hero. If you’re writing a romance novel, this is the moment the reader finally gets an answer to the will they/won’t they seesaw you’ve tortured them with on the previous 300 or so pages.

The climactic moment is the final moment where the protagonist realises they have won, lost, or reached an impasse. It’s that moment in your story where the conflict cannot go on as it has done before. No matter how your story ends, the core conflict of the story must be resolved, in this climactic moment. Even if you’re writing in a series or trilogy, there needs to be a resolution to this story’s core conflict. I know this seems obvious, but your climactic moment, that moment your story has been building to, needs to fulfil the promise you made to the reader at the start of the story, and give this sequence a satisfying conclusion.

Thank you for listening, reading, commenting and sharing with such enthusiasm.

I’m Amelia. When I’m not hosting the Authorpreneur Podcast™️ and the Book Nerd Podcasts, I write Mystery Novels under the pen name A. D. Hay. And, I’m the author of Suspicion, the Lawn, and the Candidate.

On this blog, I help new writers to finish their first draft, prepare their manuscripts for professional editing, and when they get stuck in the first draft phase or are confused about the revision process.

Right now, I’m editing and preparing my soon to be published mystery novels, Suspicion, Duplicity, 24 Hours, and Immunity for publication.

I’m Amelia. I’m the author of Suspicion, the first book in the James Lalonde Mystery Series, the host of The Authorpreneur Podcast™️ and the The Book Nerd Podcast. I help aspiring authors just like you to write and market their books so that they can, create their dream business, build their author platform, and be creatively independent. Right now, I’m editing book two in the James Lalonde Mystery series.

Excalibur is Missing. A Killer is on the Loose. One Reporter is Determined to Uncover the Truth.

James has a nose for trouble. But that’s nothing new. This time, things are different–his life is on the line. James is the chief editor of a small newspaper. It’s hardly captivating work. He’s bored. But all of that is about to change.

Late one evening, he returns home to discover his long-time girlfriend and journalist, Valentine, has left. Early the next morning, James fails to reallocate her assigned story. To avoid blank space in the culture section and losing his job, he decides to write the story on the local museum’s latest acquisition, Excalibur. But, there’s one thing he didn’t count on–Excalibur is missing, and a dead body is at the crime scene.

If you love gripping cloak and dagger mysteries with twists and turns, then you’ll love this first instalment in the James Lalonde Amateur Sleuth Mystery series. Get it now.

Yesterday, I sent Duplicity off for proofreading. Yay! And I’ve set up preorders for this novel on Kobo, B&N, and Google Play with a release date of the 24th of November 2022. And, I will be making this novel available for free to my James Lalonde Insiders reader club. You can become an insider here.