When You've Written a Pile of Garbage, Amazon Ads, and Book Promo Results

by Amelia D. Hay | The Authorpreneur Podcast - Writing and Self Publishing Advice

There’s no polite way to say this, but I’ve realised that I’ve written a pile of garbage and may need to completely rewrite the second book in my James Lalonde series. So, the first lesson you’ve learned is to never rush the initial creative brainstorming and outlining phase of writing a story.

Just don’t do that.

But, enough of my whinging.

My adventures in book marketing continue, and the journey resembles me rummaging around in the dark because I have no clue about what I’m doing. At the same time, I’m learning a lot in the process, which is actually more important. While I’m on the topic of book marketing, I will be sharing the results of the book promotions I ordered in the previous podcast episode.

So, stay tuned for all of this and much more. 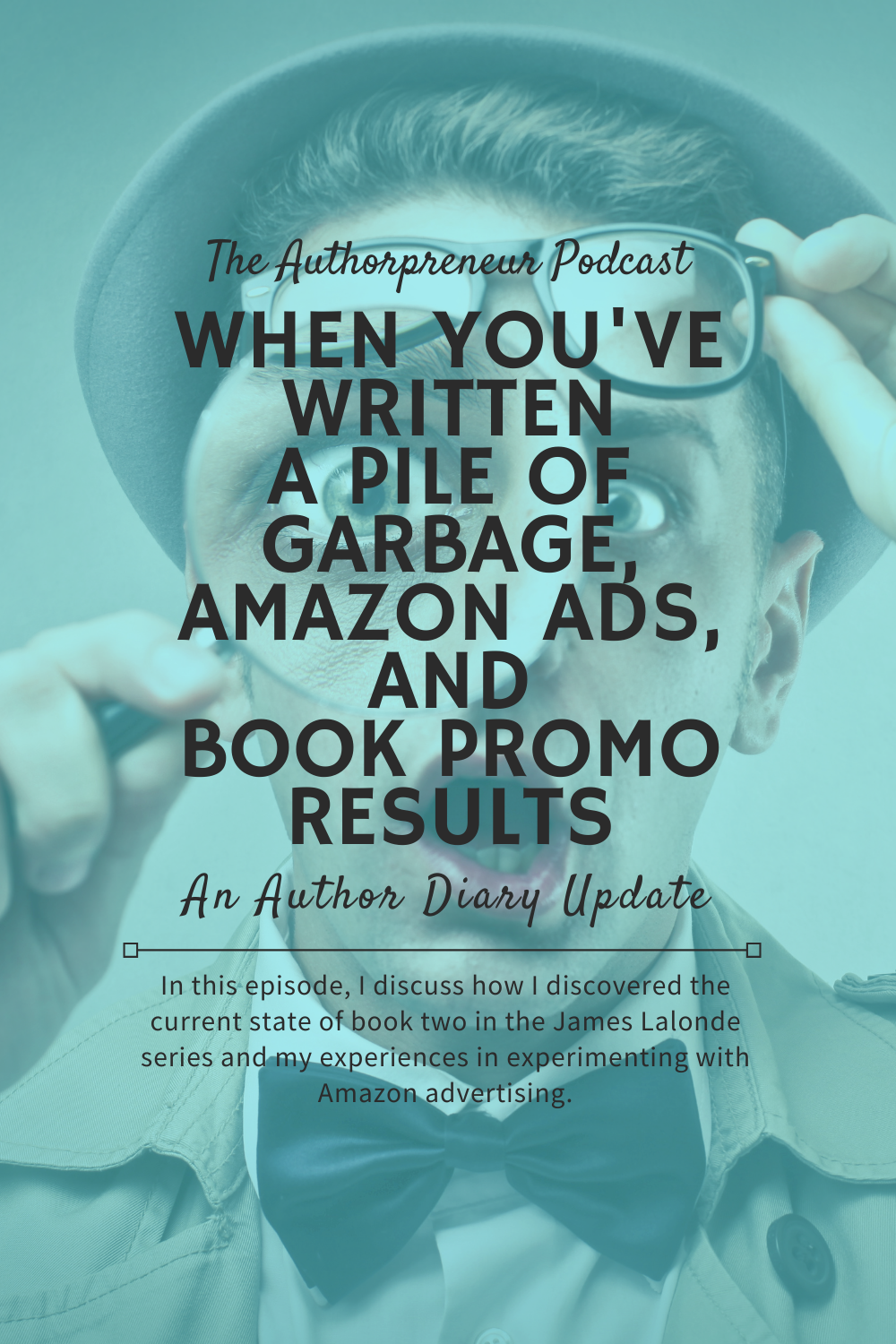 During the week, I read through parts one, two, and three of book two. After I finished part two, I started to panic because I realised that I didn’t like my second book And as a result, I’m considering a changing in the plot. In short, I panicked because I knew my second book wasn’t better than my first. My theory became apparent to me as I went through the outline and wrote the value shifts, conflict, and cliffhanger for each scene. I realised James was lacking motivation. My main character was simply going through the events of the plot because that’s what I wanted.

Book two is a disaster—there’s no other way to say it. Deep down this is something that I suspected and touched upon in a post on my blog titled “Should you write a novel in 30 days”. I’m going, to be honest, I rushed through the character creation process, outlining, and selecting the setting, and it’s starting to show.

So far, I’ve come up with three ideas to improve the plot and story arc of book two. The first requires a substantial rewrite. Second two are just different than the first but have similarities. Although, the last two options most likely require a substantial rewrite. At the moment, I’m stuck in the land of indecision and I’m not sure what to do next. I guess I just need to choose a path and stick with it.

Stay tuned for more update on this story.

While I’m on the topic of book two, you’ve probably noticed that I’m no longer referring to the story by its title. The reason for this is simple—I’m considering changing the title. So far, I’m experimenting with ideas, and I’ll choose a title by the end of April or when I finish the next draft of the story. At the moment, the publishing date for this book is a little up in the air. This is because I’m already behind in my schedule.

Technically Immunity was the start of a new series called “byline.” For a while, I’ve considered including all books in one series. And, naming the series after the protagonist, James Lalonde.

At present, I’m starting to see the benefit in publishing Missing and book two as a different series from Immunity and the other books that I’ve planned. A change like this means, I will need to add a story between book two and Immunity, to turn the James Lalonde books into a three-book mini-series or trilogy, because I don’t think a duology makes sense. I’m yet to see a duology within the mystery, thriller, suspense, and crime genres.

So, far I’ve got a few ideas but not enough for a complete book, just a few ideas about the location and where the crime will be committed. I’m starting to feel a little discouraged about how much slow progress that I’m making on developing the story idea. However, I realise that I’m putting too much pressure on myself.

On Friday, February 7th, I created my first Amazon Advertisement on Amazon.co.uk. I chose the product targeting option and chose nine categories that relate to my crime thriller novella. Because the ad is on Amazon.co.uk, there is no copywriting involved.

Upon starting the ad, I chose a low bid with a daily budget of £5.00. The timeframe for the ad will be from February 7th to February 17th, but I selected no end date. With this ad, I plan to see how it goes and make adjustments as I go along. But, I’m not expecting to make a massive amount of sales, break-even, or even have a high ROI. It’s all about figuring out how to do ads and hopefully learn to enjoy the process.

At this stage, I will point out that I have no idea what I’m doing with Amazon ads. I’ve purchased no courses, read no books—I’m just trying it out as I go along. Please don’t take any of this as advice, because I’m most likely doing the wrong thing.

Before I share the sales I received and the total price of these promotions, there are a few things you need to consider. I’m not enrolled in Kindle Unlimited. My crime thriller novella, Missing, was on sale for 99 cents in all regions. And, not all of the email list promotional services are curated by genre. Now that I’ve shared all of that information here are the sales I received while these promotions were taking place. It’s worth pointing out, there’s no way of knowing that all of these sales were the result of the emails, but they occurred on the same day or the day after.

Without further ado, here are my results.

So, how much did all of these email list promotional services cost?

I spent a total of £87.85 or $113.62 USD across all four book promotions. That’s excluding the cost of my boosted Facebook post. So, to save you from doing the math, I did not break even on these book promotions. To be honest, I wasn’t expecting to, I’m okay with making a loss on this book. Obviously, this is something that I hope will change as I publish more books in this story world.

The boosted post on Facebook helped me to grow my audience on Facebook, it didn’t directly lead to more sales. Next time, I’m going to boost the post more strategically and aim for more clicks through to my website, where potential readers have the option to sign up to my email list and receive a free short story. Eventually, I will ask the most active subscribers to join my advanced reader team, so they can get book two for free and leave a review if they want.

If you have any questions or have tips on book marketing that you would love to share with me, please leave them in the comments section, below.

Thank you for listening, and happy reading and writing, everybody.